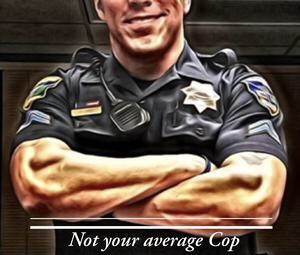 WARNING! If you are easily offended reading about how police can be manipulated by women, do not read on.

Women enjoy a genetic bias when speaking to police. Females can appear all pouty and innocent and helpless, and the male (OR female…today) cop transitions to “hero/white knight mode” and sets out to slay dragons for the fair damsel in distress. It’s just Darwinian… evolution encouraged man to protect the woman he was most attracted to at the moment so his spermatozoa had a quality deathbed.

So, for certain, Senior Detective James Ward saw himself as “saviour” to Jaclyn Solomon’s best damsel act. He came to MY Small Claims Settlement conference (suing Helen for slander), and he sat right in front of me. He wanted to be seen as Jaclyn’s personal bodyguard.

Why is a detective who is investigating me INJECTING himself PHYSICALLY into my civil matters?

What exactly is his objective, and did he think it through?

No, he was negligent and by INSERTING himself, he exhibited obvious BIAS. Jaclyn needed no bodyguard, yet she had TWO COPS beside her. Why? One was in uniform. Jaclyn, as a paralegal and frequent filer, called on Court Cops to assigned her a man.

THEN, Det. Ward testified he came “only because Ms Solomon invited him to do so.”

Jaclyn had lied that I sued Helen AFTER I was arrested, JUST TO SPEAK to Helen through her. Yes, Det, Ward bought that story without even double checking the dates on the suit he held in his hands.

I sued May 11. Helen got mad and arrested me May 30. She hired Jaclyn Solomon, Lawfully Yours, and Jaclyn solved the problem in an instant. IN her defence, Jaclyn stated that I had sued her client ONLY because Helen arrested me, and ONLY to have a legal reason to talk to Helen through her.

Parse that oil for own.

Upon my arrest, I was forbidden to speak or contact in any way… Helen Clarke.

Jaclyn swears that because of that recognizance, that I came up with a way to LEGALLY contact and speak to Helen… I would simply SUE Helen so she needed a lawyer, and then I would speak to her in the form of emails to Jaclyn. Got that in your mind?

Now, forget the dates even… just consider that Jaclyn is swearing that I sued Helen on May 11, 2018 to communicate legally to Helen surreptitiously BECAUSE in HER mind I had already been arrested on May 30, 2018.

THEN, she convinced Det Ward of the impossible event. He bought it. He was negligent. he should have opened my lawsuit to read the date filed, then gotten a calendar to see if May 11, 2018 was before or after May 30, 2018. he would have noticed May 11 is PRIOR, or BEFORE, ore PRECEDES…. May 30 in the Gregorian calendar.

Maybe jaclyn uses the BC calendar, THAT’S IT! I never realized that until now.

I used the “AD Calendar”, After Death, so in MY calendar, it shows time as going forward. May 30 follows May 11.

BUT, in Jaclyn;s world, her calendar counts BACK from zero to the past.

So, the first day PRIOR to zero was December 31, and before THAT was December 30 and so on back to December 1 and then November 30 preceded that. So, Jaclyn sees May 30 happening and 19 days LATER she sees May 11 happening.

So, what we have is an AD/BC conflict. Not as electrified musically as is AC/DC, BUT it’s a song AND dance nonetheless.


You gotta read this stuff!

Supremes: “the standards that a reasonable officer would have followed at the time”

In the case of Hill v. Hamilton-Wentworth Regional Police Services Board, 2007 SCC 41, [2007] 3 R.C.S., the Supreme Court of Canada recognized the tort of negligent investigation by the police. In paras. 74, 78-81, 86 and 88, the majority of the Supreme Court of Canada held that the police officers’ conduct in relation to the accused must meet the standard of a reasonable officer in similar circumstances.

All I have to prove is that Jeff Brown, James Ward, John Loughry and Det Goobie all failed to investigate to the standard of a REASONABLE officer. And the case law is overwhelmingly in my support.

Think about it… I was NEVER interviewed before any of 7 arrests.

Every arresting officer merely received Mandie’s evidence, filled in the paperwork and then called me to come in to be arrested. Well, there was one Ubercop pickup and frisking on the center line of the road in front of my neighbours.

For me to lose, police would have to prove the typical officer is ALSO not required to interview ANY accused.

It Is Impossible to PROVE mens rea (a QUILTY, errrrr… a GUILTY mind) WITHOUT an interview

How is it possible to PROVE what a man knew or WHY he did something without asking him?

Police would then argue “strict liability” applies on a breach…. WRONG… if jail could be the sentence.

Not only was I jailed, I was IMPRISONED….. TWICE if you believe Crown Greg Elder December 6-9, 2019 when he told the Crown/Prison computers that I spent that weekend in Lindsay…. while I was in Southlake hospital in Newmarket.

The combination of an absolute liability offence and the possible sentence of jail violates section 7 of the Canadian Charter of Rights and Freedoms and is unconstitutional. Specifically, jail violates a person’s liberty and an absolute liability offence is not in accordance with the principles of fundamental justice. (See Re B.C. Motor Vehicle Act.)

So, lets take an early example of negligent investigation.

Right away, Mandie describes me as being “critical” of her and “their mandate” which are red flags for “politically active”, SO, Dipchan should have considered for a moment, at least, that Mandie and Sandra may be biased and have a motive for false arrest...SILENCING my blog. He does not pursue that obvious angle.

Then, Mandie mentions “social media”… that I Googled her name and found out so much about her past and why she may have gone overboard assaulting me from behind…she saw herself as a battered, molested young girl and woman and she would never again let a man push her around. These attributes were testified to by her own words in thousands of postings on RoaringWomen.com and BlogSpot/RoaringWomen. A 2019 article about her daughter, Bekah D’aoust states her daughter’s age as 31. Mandie says 1971 is her birth year in a “Daria taunt” and the math suggests Bekah had a very young mother. Perhaps she was adopted.

Here, Mandie expresses her fear that I spoke of “suggestions how to run the town more efficiently”

Now, I know civil servants are self absorbed… but to COMPLAIN TO POLICE that it was simply suggested “how to save money”… is beyond belief. It’s sublime. In one sentence she admits every taxpayer’s greatest fear… that Aurroa staff sit around bitching that they may have to one day DO something to improve.

Fast Forward – July 12, 2014, two days before arrest #1… Aurora gets DC Schultz assigned to scare the shot out of my wife and make her want to divorce me.

Now, we all know from cop shows on TV what “rousting” is. Where cops make a big show driving up and parking with the blues on in a no parking zone and banging in the perps door so all his neighbours see his latest new friends in blue.

Schultz decides to tell my wife what they are doing to me. So he drives up, parks in no parking, tells my wife

“Your husband has a problem with the Town of Aurora!”

Remember “The Godfather”?, pick any version… “You got a problem with me?” OK, maybe it was NOT TGF.

Whatever, he identifies he is representing Aurora in this disagreement,

But…Negligent? Because he should have concealed who he was working for.