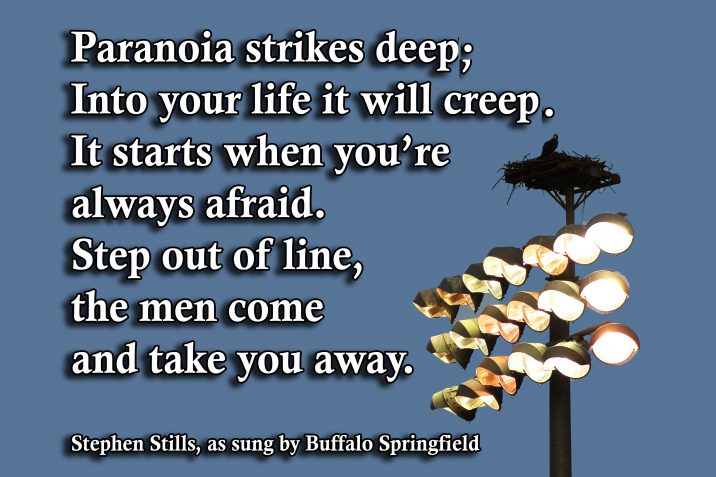 Every once in a while I force myself to link together previous posts so they mean something. To me, anyway. Meaning something to you is not so important.

I have spouted off on many small issues, on many small people, and now let me see if I can connect them into a theme of some kind.

First off, where is Neli Young?

This past week we had a much more potentially deadly and significant event, and yet, Neil comes up AWOL.

More Americans now die per DAY than died in the final moments of the Twin Towers collapse.

Civil war inched closer as Trump incited a riot that put various whackjobs sitting in the senate. More than any Republican election could have done. “Proud Boys”, and worse, roamed the halls of the senate and killed a cop. 4 more people died before the hordes were dispersed.

But we did NOT get a new Neil Young song to remember it all later.

Kent State, for the kids, was where the military shot and killed university kids with long hair and carrying posters to protest the Viet Nam war. This was before Twitter which lets you protest from the bathroom or the waxing salon.

9/11, for the really young, was one of the first attacks on USA homelands. Other than the Japanese at Pearl Harbour and s few German subs during WWII.

This equates to just 1.2 years of Covid-19, and we have completed a year now.

Covid-19 is 5 times as deadly as WWII, and yet, Trump did nothing BUT incite a riot with a warmup speech he gave the perps that morning.

Why is this not now judged as the most divisive act in modern history?

Because. Not everyone agrees it has happened yet.

This equates to the CBS AND CTV AND GLOBAL supporting him. Why is this happening?

Because we are still stupid at our early stage of evolution. We still are trying out the “binary” phase of evolution where half of us try one way and half the other way and the winners go forward to the next round.

What Fox DID do was celebrate was the death of Alex Trebek. A Canadian.

How does any of this apply to you?

You will now pick your fantasy team from your favorite celebrities worldwide, and you will roll the evolutionary dice and try to go forward.

What millions of years of geologic history tell us is…. that this is not our first rodeo. The Mayans are gone. So are the Atlantis-iennes? The classic Greeks and Romans, all gone.

Why? They failed to evolve. They found a plan and stuck with it until their plans killed them all. One has to change plans on occasion, and usually those occasions are fairly obvious to the perceptive.

It’s our turn, and now we have to choose to support Trump or someone else.

What all the ancient civilizations got right was having a religion. Their leaders realized they needed to breed fear into every living human being. Only fear would work to control the vast hordes of uneducated people.

No human can control millions of uneducated others. They have no “common bond” to make them feel a prt of a grander scheme.

To succeed at the universal “#1 on my To DO List”, world domination, a human being has to create a fiction of an all powerful god, living not far way, even nearby, even “everywhere” who sees everything and magically smites enemies of the believers and rewards faith.

Then, the human leader merely invokes the most popular god of the era, and scares the shit out of the evolutionary-dumb hordes, and they do what he commands.

Simple stuff really, and today we can boast of the remnants of any number of religions that such leaders created over the millennia. On demand, today’s leaders can invoke capital G god, a Pope and a papal country, and the Muslims can still enjoy their own fantasy to retain the faithful generating cash for their leaders.

The really strong buildings still found in ruins today are typically churches, because that is where everyone send their money, or beaver pelts or maple syrup. Churches were always the largest, the most ornate things created by man. When the prospective overlord needed more, he did a Stonehenge or two, some drawings on the plains of Nazca.

A man finds it very difficult to lead if he does not have a religion backing him up. Bench strength. Call it what you will, every religion real or imagined attempts to explain the unexplainable as acts of their unique god.

“Why do hurricanes happen?”… “god is displeased”.

“Why do I not have any money?” … “god rewards the believers, believe in ME!”

“Why did people trust Walter Cronkite, but now will not trust Chris Cuomo?” …. “god rewards those who watch Fox News.”

And if that makes sense to you, then you may survive.

But, if instead, you think everything I just wrote is bullshit, you are destined to meet Darwin without leaving your family with adequate genes to go forward.

But, if some of what I said reverberates in your brain, you have chance to evolve further.

If you can think for yourself, you will probably not suffer the same fate as those you believe in.

Thousands thought the same as Trump last week, and look what happened.

Those who thought like Biden will live on. Natural selection. 50-50 toss, luck of the draw. All that is guaranteed is that people will split on every issue presented to them. Always have, always will.

So, the fact I am in a “battle” with York Regional Police, and Aurora and its sycophants is of no surprise to me at all. Destiny. Fate. Evolution. All words for the same thing. Shit happens.

If I were to ever get weak enough, I would likely grab a quick look at a few religions and find one with low annual fees and maximum protection from the hordes. Because, hordes is what we’ll get when religion fails to bind together the like-minded.

We also get hordes when religion DOES bind us together.

What brand of horde do you prefer?

For What It’s Worth

I think it’s time we stop
Children, what’s that sound?
Everybody look, what’s going down?

It’s time we stop
Hey, what’s that sound?
Everybody look, what’s going down?

It’s time we stop
Hey, what’s that sound?
Everybody look, what’s going down?

Paranoia strikes deep
Into your life it will creep
It starts when you’re always afraid
Step out of line, the men come and take you away

We better stop
Hey, what’s that sound?
Everybody look, what’s going down?

You better stop
Hey, what’s that sound?
Everybody look, what’s going down?

You better stop
Now, what’s that sound?
Everybody look, what’s going down?

You better stop
Children, what’s that sound?
Everybody look, what’s going down

Historical note: Stills, Crosby and Young named their group “Buffalo Springfield” after a steamroller they spotted en route to Hollywood in the 60’s.

Is it not cute that 4 rock and rollers named themselves after a real rock roller? That thought ALONE will keep me giggling all day. Maybe a few of you as well. (Hi, Grant!)

Good thing they did not drive by an Australian Calfoozer…. they may not have attracted the same audience.

Wait! Did you hear that?