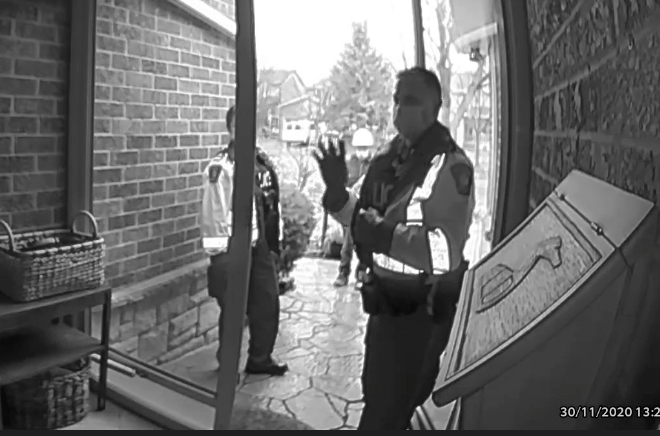 I’ll start with the punchline: 2 Police officers “PC Flowers #2585” and “PC Skelly #2526” entered without a warrant AND without an invitation.

This link to YouTube starts as I invite the Town, BUT NOT POLICE, to go check my meter, otherwise they were going to shut off my water.

They actually gave me the incident report, complete with all of its duplicity.

Bob the Cop: “I have read your conditions, you’re not supposed to be blogging.” – outright duplicity.

You can read it as easily as I can.

Aurora sent the cops at the suggestion of Allan Downey. Mr. Hayworth is hardly a regular reader of my blog. I checked. In fact, some friend of Downey’s HAD to tell Allan as well. 1₂ is a regular reader. She rolled over one morning and told him about Fartgate. He went in to work at Aurora and ordered Lindsay and friend to pretend they read it and call police.

Both Aurora and police KNEW they had no rights to entry to see my meter. They actually wrote that in the GO# above (General Occurrence Number).

THEN, in writing, they admit their plan was to trick me instead of telling me the truth. This is so typical of police. No wonder the public never trusts them.

NOW, in addition, the report is carefully edited to:

Now, why would police not just tell the truth instead?

A. Because they are always “building a case” by misleading the public.

Please read the attached PDF.
My 3 year probation order of December 4, 2019 falls.
I no longer have any “Not to mention” clauses.
As you would except, I plan to resume  blogging JUST as I did in June 2017 when I was first falsely accused by 1₂

So, fully 55 days BEFORE they illegally entered my home, Detective Sergeant Heather Bentham KNEW my bail terms had changed.

So, what she did was make sure CPIC did NOT get updated by telling Dep. Chief Andre Crawford to tell his CPIC input person to “forget” my new terms completely. It could not have been a mistake after all those MONTHS in error.

Me to Bentham/Westgate: “May I have your help advising police of the successful appeal and the cancelled probation order?”

They use CPIC to decide what probation orders are active and I do not trust them to modify it.

J. Rose conviction December 2, 3, 4 2019 reversed– The conviction on a breach is reversed and a new trial ordered. The 3 year probation order falls.

J. Henschel December 6, 2019, My breach appeal was dismissed, I will now move to the Court of Appeal for Ontario and will request leave to appeal through you soon.

J. Harpur‘s sentencing did NOT impose a “not to mention” clause at all.

I believe I now have no restrictions on “Not to mention” any person name or any company.

I would appreciate knowing if that is your assessment, but I know you will refuse to answer because it sounds like legal advice. 19 of my 27 charges were based on the “Not to mention” clause. I think we should get it clear to all parties what the net result is.

My last 2 charges in March 2020 are breaches. Neither of these 2 remaining charge can be proven because no recognizance restricted anything I do in a court room or court office on court documents buyyou accepted charges anyway. Read the two charges again please. The alleged acts are not crimes and not covered by any recognizance.

*** May I have your help advising police of the successful appeal and the cancelled probation order?

They use CPIC to decide what probation orders are active and I do not trust them to modify it.

I copied DS Bentham on this but she has not been acknowledging receipt in any wau.

This will be the first time since July 14, 2017 when I have NOT had a “Not to mention” clause in my bail recognizances. J. Dawe and J. Harpur BOTH ruled the clause was not legal.

I, of course, will blog the facts as I always have. I only state what I have proof of. That said, if police still want to protect ex-cop POI-A they will just arrest me over snd over again and there is nothing I can do to stop them.

It must be noted that not even one charge of 3 by POI-A OR 19 by POI-C was successful. Not even one. Every time these two women came to you, they wasted your time. They made everything up.

Out of 27 charges, just one criminal charge by POI-B was determined guilty and my appeal may be accepted and ready to go today, I cannot say as no one replies. All the rest were AOJA charges now de-emphasized by bill C-75.

When will the Crown retry me on the breach heard by J. Rose? When will I know? Will you still refuse Crown Pre-trial Meetings t review my evidence?

May I now ask for:

A fresh new recognizance of bail for any and all outstanding charges. I believe having a nice clean copy will help me.

Confirmation that my wife Jutta Lepp is now removed as a surety? Can she now move out? Is she no longer liable to a $15,000 surety?

Thanks if you can,

May I have your help ….They use CPIC….I do not trust them to modify it.

And, surprise, they REFUSED to update CPIC.

Why Barry Stork lets the cops keep making these admissions of guilt in my lawsuit is beyond me.

So, Charles Painter keeps telling me I should get legal advice. I think with these kinds of witnesses I need no legal advice, I just need my camera and microphone. And my blog.

So, now that I have announced I need my blog, watch police and the Crown try to eliminate me blogging again.